In 1819 Byron published the first two cantos of Don Juan. The long, digressive poem was based on the legend of Don Juan, yet in this version Byron reverses the story to portray the Spaniard as the victim of the advances of women, rather than his traditional portrayal as a womaniser. Upon publication the ‘immoral content’ of the cantos was denounced as ‘an insult and an outrage’ and the work ‘a filthy and impious poem’ yet it found great favour with the general public and became very popular.

Also in this year John Keats wrote two of his most famous poems, "La Belle Dame sans Merci" and "The Eve of Saint Agnes". "La Belle Dame sans Merci", a ballad describing a knight who is fatally enchanted by an ethereal woman was lightly dismissed by Keats himself, and yet has stimulated much discussion amongst generations of writers and critics. "The Eve of Saint Agnes" is a narrative poem about the events leading up to the flight of a pair of lovers, Madeline and Porphyro. The poem’s rich and vivid imagery and atmosphere of excitement and passion has rendered the poem one of Keats’s most successful and appreciated works.

The Raft of the Medusa was completed by the artist Théodore Géricault when he was aged just 27, and became an icon of French Romanticism. The painting depicts a moment in the aftermath of the wreck of the frigate Medusa, which ran aground near Mauritania on the 5th of July 1816. 147 people were set adrift on a raft, which was only retrieved 13 days later, by which time only 15 survivors remained. Reports of cannibalism, murder and savagery created a scandal in the press, further inflamed by the fact that the French government had not made sufficient efforts to find the missing sailors. Exhibited at the Paris salon in 1819, the painting attracted equally acclaim and condemnation and it became a seminal work of early French Romanticism. 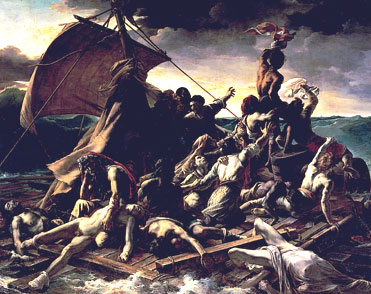