The week of 5th July was a busy time for KSMA as we went ahead with some of the Bicentenaries events that had been postponed and later rescheduled due to the Covid pandemic.

On Sunday 11th July the long-overdue Winchester Water Meadows Walk took place; this was no one-dimensional passeggiata along the path of the beautiful River Itchen and the 18th century water meadows which flank it, but a full-on combination of poetry, the historic heritage and the great outdoors.

In 1819 John Keats felt the urge to take himself away from London, even though he had recently become engaged to his beloved Fanny. Searching for inspiration in what was probably his most creative period, the so-called ‘living year’, he spent time in Chichester, the Isle of Wight arriving in Winchester in July. Sadly, the lodgings in which John Keats stayed with his close friend and companion Charles Brown, have long since gone, but the scholarly debate continues about their exact location, and this event contributed some further ideas to this debate. Winchester made a favourable impression on the young poet and in his letters to Fanny, his brother George and his friends, he eulogises about the Cathedral, a cricket match, and the secular buildings from another age.

We convened at Winchester College, an historic institution founded in c. 1382, by Archbishop William of Wykeham. Fellows Librarian, Richard Foster gave us a tour of a display which included a set of contemporary water colours of the river and St Cross and a fine first edition of Keats’s 1818 poems. Meanwhile, Headmaster Tim Hinds spoke about the College and its importance to the romantic movement and he kindly presented us all  with copies of his booklet Bards of a Feather, which reflects upon the history of the College and the romantic movement.  The College Museum was also opened for us, with its beautifully displayed collection of objects from Asia, Ancient Greece and the Middle Ages.

The experience continued in the Courtyard garden, where two members of the cast of Blue Apple Theatre’s production of Frankenstein, Sam Dace and Lawrie Morris, performed extracts from the play.

The paths of Jane Austen and John Keats never crossed, but we paused outside the house on College Street where Jane died in July 1817, and here Stephanie Norgate read her moving poem ‘Jane Austen’s Visitor’ from her forthcoming anthology The Conversation. Adam Rattray then guided us through the cloisters of the College to the Medieval chapel and then stopping briefly at the wall where alumni, Anthony Trollope had left a graffiti, but we did not see another mark inscribed by this unhappy pupil on a banister elsewhere in the College.

We paused at several points of interest during our progress along the river where South Downs poets, James Simpson and Stephanie Norgate, read some of Keats’s odes and pieces of their own work while James described how this special natural habitat has changed so much since  Keats’s time. His poem from Map of Lost Cuckoos poignantly describes the drastic decline in their numbers and those of other native bird species. The moment was captured by a group recitation of To Autumn, forever associated with this special place.

The last port of call was the Hospital of St Cross with its Norman church and medieval alms houses; and here we were greeted by Brother Adrian, who spoke so eloquently about the institution and also about Keats and his timeless association with the Hospital. The lovely gardens of St Cross were open to the public on that day, so this provided a fitting conclusion to the day. 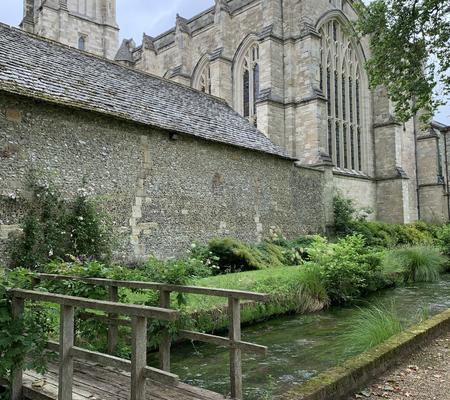